How to Choose Crampons

If you’ve spent any time in the mountains during the winter, then chances are pretty good that you’ve seen people with crazy-looking spikes on their feet. While they may look like strange medieval torture devices, they’re really just used to either improve traction when walking on snow and ice or help the user get up a technical, vertical ice climb.

What are crampons? Modern CRAMPONS were developed in the early 1900s by Oscar Eckenstein, an English rock climber and mountaineer. His innovative ten-point design made his alpine expeditions drastically easier by reducing the need for step cutting, and Henry Grivel later made the design commercially available. 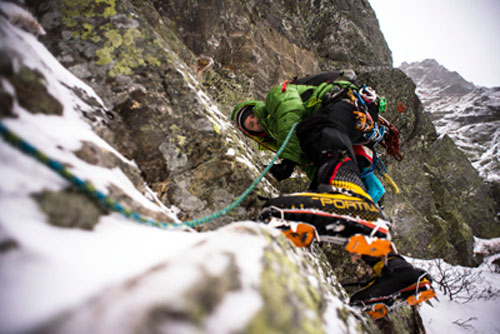 Fast-forward to today, and the market is flooded with all different kinds of crampons. Some have as few as eight points, while others have as many as fourteen. Some are highly specialized, while others are suitable for more general use. Keep reading to learn the differences and figure out which crampon will suit your needs best.

Alpinists, ski mountaineers, and anyone looking to climb any ice or mixed route are going to need a good pair of crampons on their feet. There are many different styles available on the market, however, and the type you need will vary depending on your activity, so it’s important to understand which characteristics—aluminum v. steel, strap-on v. step-in v. hybrid bindings, 10 points v. 12 or more points—make a particular model better for one thing than another.

If you’re short on time, here’s a simple chart to give you a quick idea of what you should be looking for in crampons based on what you plan to do with them:

What are crampons made of?

When shopping for crampons, you'll find that some are made of steel or stainless steel while others are made of aluminum. The main difference between the two is weight: aluminum crampons are lighter than steel crampons.

If you’re mainly looking to use your crampons for alpine or ski mountaineering, then aluminum is a better choice since you want to carry as little weight as possible and there’s a lower chance of encountering overly rocky terrain.

For everything else—especially technical ice and mixed climbing—you’ll need steel crampons. They make up for their slightly greater weight by being much more durable than their aluminum counterparts, which makes them more suitable for trekking across technical, steep, slick trails. Crampons made of stainless steel also hold up particularly well against rust and corrosion.

How do crampons stay on?

The most versatile type of crampon binding is a strap-on binding. With a toe strap and heel strap, these can be fastened to just about any kind of boot, regardless of its stiffness. Strap-on crampons can take a little bit longer to put on, but their versatility makes them a great choice for anything from mountaineering to climbing moderate ice routes. (They’re also an ideal choice if you have more than one pair of boots you’d like to use but don’t want to spend money on multiple pairs of crampons.)

Crampons with step-in bindings are also usually the stiffest, which makes them the best for vertical ice and mixed climbs. They aren’t as versatile as strap-on crampons—you need to have either a stiff leather or plastic mountaineering boot to use them with—but they do provide the most secure fit. Step-in crampons attach to the front of your boot via a wire toe bail, and clamp onto the boot securely with a tensioned lever on the heel.

For the best of both worlds, look for crampons with hybrid bindings. Also called “mixed” or “semi-step” crampons, these models combine the simple toe strap of a strap-on binding with the security of a step-in-esque heel lever. Hybrid crampons are super easy to get on/off while wearing gloves and are more versatile than step-ins (though you do need to make sure your boot has a heel welt for the lever to work, so they’re slightly less versatile than strap-on models).

The majority crampons have either 10 or 12 points (sometimes also called teeth), positioned under the instep and along the edge of the boot, and one or two frontpoints. Some crampons have as many as 14 points. As with frame material and binding type, the number of points you need will vary depending on what you’re looking to do with your crampons.

A ten-point crampon will be perfect for hiking on less-aggressive terrain. They’re particularly great for ski mountaineering trips or glacier travel. If you are only looking for crampons to use for hiking (as opposed to vertical ice/mixed climbing), then you’ll probably be happiest with a ten-point crampon with less-pronounced frontpoints.

If you’re looking to do more technical mountaineering or vertical ice climbing, you’ll want to move your attention to the twelve-point models and look for a pair with more aggressive frontpoints.

There are three options for frontpoint design: horizontal, vertical, and monopoint.

Horizontal frontpoints are good for all-around use, and provide greater surface area to make walking on snow easier. However, they don’t perform as well as vertical frontpoints on steep ice climbs unless the ice is soft.

Vertical frontpoints are great for steeper ice and mixed routes, as they are better at penetrating and locking into hard ice. They are sometimes serrated for even better performance. The single frontpoint of a monopoint crampon is great for technical ice or mixed routes since it can fit into pretty much any crack or crevice. For mountaineering, though, stay away from monopoints—they won’t be nearly as stable as a crampon with dual frontpoints.

Modular Frontpoints Crampon frontpoints are either modular (adjustable/replaceable) or non-modular (fixed). If your crampons are going to take a lot of abuse—either from extensive use or from climbing a lot of mixed routes—then modular frontpoints are the best choice since you can easily replace them.

Crampons with non-modular points are often a little bit lighter, and provide extra peace of mind since you don’t have to worry about losing your points due to a loose screw. These fixed points can be sharpened with a file when they start to get dull, but be aware that the more you file them, the shorter they’ll get.

When shopping for crampons, you’ll find that they either come with anti-balling plates or that you can purchase them separately (highly recommended). These plates are typically made of ABS plastic and prevent snow from building up, or balling, underneath the crampons. If you’ll solely be climbing vertical ice or mixed routes, then anti-balling plates aren’t entirely necessary...but if you’re going to be walking on snow, then you’ll definitely want the plates.

Once you have your crampons, it’s also a good idea to also invest in either a crampon bag or a set of point covers. This will help protect the rest of your gear from the points when the crampons are in your pack.